Your browser is out of date.

You are currently using Internet Explorer 7/8/9, which is not supported by our site. For the best experience, please use one of the latest browsers.

Pressure is mounting on ski resorts to stretch their active season, both early and late. Plus, changing climates have reduced natural snow in recent years. All these factors inflate the yearly cost of creating a resort’s single most important commodity—snow.

To reduce this expense, resorts have tried many technologies geared toward precooling the snowmaking water over the years, with little improvement or at a large capital cost. Precooling the source water allows the generation of more snow through higher achievable flow volumes.

To solve this problem, Resource West Enhanced Evaporation has spent 12 months of R&D efforts on lowering the cost of precooling that snowmaking water, with great success. We replaced what had been a costly asset—a fixed cooling tower consuming 40 to 90 to hundreds of HP—with a floating cooling tower set producing 20 tons of cooling with just five horsepower. 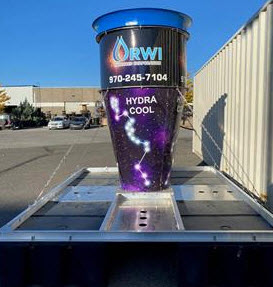 The heart of the system is a unique airfoil that moves air with greater efficiency than was previously possible. RWI coupled that with an in depth study in manmade wave formation that showed them how to accelerate thermodynamic loss, creating a system that greatly enhances the production of snow.

“When the sun heats the water impounded in a pond or lake, snowmaking is less efficient than it should be,” says RWI’s Director of Research and Development, Robert Ballantyne. “By finding a way to drop this water’s temperature closer to freezing, we’ve made snowmaking much more efficient.”

The unit uses only 4.4 Kw of electricity to reach cooling power of up to 20 tons per hour when humidity levels are below 90 percent. This allows resorts to make snow at all times, instead of having to wait for the nighttime radiant cooling to increase flow rates. And if the HydraCool™ freezes into the pond overnight, that’s fine—it’s ready to go again the next morning. RWI developed it to freeze into the pond with no harm.

HydraCool™ is available as a rental to ski areas that would like to test before committing to capital investment in the systems required to host skiers earlier and make more money. Says Ballantyne, “When snow is your one and only commodity, you had best be pushing the state of the art envelope at all times in its production! The cash register at the coolest night club at the resort stays deathly silent unless that number one commodity—snow—is on the ground at ski-worthy depths. The earlier the better!”